Giving you just that 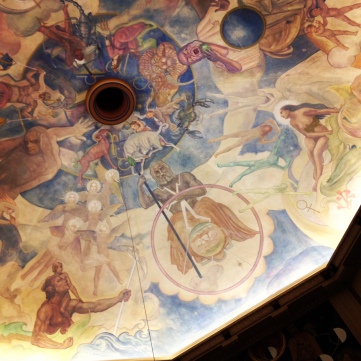 The universe has given us a shared language in astrology

I recently went to see a planetarium show at the Griffith Observatory in Los Angeles.  It was a show I had seen before, about the birth of the cosmos and the history of astronomy.  In the past, I had found it to be visually lovely and rather entertaining.  But this time, I was more so affected by the narrative content of the piece.  In particular, I was struck by the fact that ancient civilizations like the Greeks, Romans, and Egyptians saw astrology to be the same as astronomy.  The zodiac was established and used to study the night sky but was also used as a tool for how to live one’s best life.  It was all essentially a uniform science that we, over time, have created a separation for.  Astronomy has become considered true science while astrology just a charming and, to some, silly ideology.  And, it’s a shame really.  Because something rooted in such human history, as well as in nature, shouldn’t be looked down upon because we have entered into a world ruled by technology.  Our relationship with the natural world should be our most important.  And if the universe has given us a shared language in astrology, then we should all take an interest in it so we can each better understand our own personal nature.

As I have spent the past few days deeply pondering all of this, I was intrigued to find that Pluto, the God of all things profound, and Mercury, the communicator, were meeting up for a conjunction in Capricorn, the sign of serious ambition and goal-attainment.  That means, in astrological terms, that it all makes more sense that I would be immersed in grand thoughts about the cosmos and the meaning of it all.  It would also make sense why I spent yesterday morning on a call with my Capricorn friend, who wanted to discuss the deeper meanings of his romantic life.  And also why a group of my friends and I got together last night to start organizing an action plan on how we were going to accomplish our big goals for the year.  This is some serious life realness we have going on right now!  There is a powerful scent of “what is the bigger picture for my life” in the air for all of us right now, so we all must take a big ass inhale and breathe it in.

END_OF_DOCUMENT_TOKEN_TO_BE_REPLACED

What of your emotional past have you been hoarding?

The other day, I had an Emma Thompson moment in the dressing room of a Saks Fifth Avenue outlet store.  If you’ve seen LOVE ACTUALLY, then you have an idea of what I’m referring to.  It’s that moment in the film where she ducks into the bedroom to have a quick, private cry before returning to her family as if nothing is wrong – an emotional dance you assume she has done one too many times.  Well, I didn’t duck in purposefully to have a cry.  But after a long, tiresome day and attempting to fit my post-holiday weight gain butt into some clothes designed for much taller and thinner people than me, I broke down.  Not because I was feeling ugly or fat, but because I was depleted.  I was beaten and tired from my year and hadn’t taken a moment to exhale it all out.  So instead, the moment chose itself, under that horrible, department store lighting.

It was then I recalled that it was the full moon in Cancer that day, so for a Cancer moon like me, it was going to be a day of harsh, emotional challenge.  And I had to release it out.  However, later that day, after some further retrospection, I realized that the full moon was actually about releasing more than some tears.  See, this was not the first time I had been the star of a dressing room cry.  But I had to work a little bit harder to make it my last.

It’s important to throw things out and start anew

The Cancer full moon is all about releasing your past.  You see, in general, Cancers are all about collecting the past, and they do a good job of utilizing what they gather as they move forward in life.  But it can also be easy for a Cancer to hold onto the past in a way that is unhealthy.  I’d imagine that the first hoarder was probably a Cancer.  Some cave man or woman just rolling a ridiculous amount of stones into the home cave, storing them for some event that would never happen.  So this past full moon was well timed with the New Year.  You may have found yourself wanting to be rid of unnecessary clutter.  And it’s important to throw things out and start anew.  But the greatest place to take stock is inside of your self.  What of your emotional past have you been hoarding?